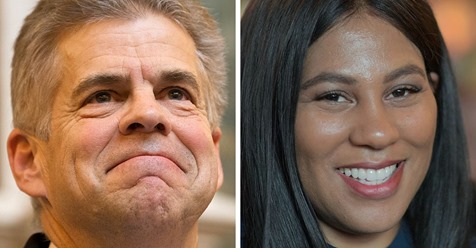 RICHMOND — Virginia Democrats surged in fundraising over the summer, building a lead over Republicans in total cash reserves heading toward this fall’s crucial legislative elections.

Democratic candidates for the House of Delegates reported a total of $8.6 million cash on hand as of Aug. 31, compared with $7.7 million for Republican House candidates, according to the nonpartisan Virginia Public Access Project.

On the Senate side, Republicans reported a slight overall lead, with $5.3 million on hand compared with $5 million for Democrats.

All 140 seats in the legislature are on the ballot this year, as Republicans defend razor-thin majorities in the House (51-48) and Senate (20-19), with one vacancy in each chamber. With the balance of power up for grabs, Virginia is drawing enormous attention — and money — from national interests in both parties.

Interested in joining with other Falls Church City Democrats who are dedicated to improving our community? Do you want to receive email updates about democratic meetings, community events, candidates, campaigns, and elections? Sign up here!

The Falls Church City Democratic Committee meets on the 3rd Wednesday of every month from 7:30 to 8:45 p.m. Due to COVD-19, and until further notice, the Committee will meet via Zoom, rather than in person at the Falls Church City Community Center. To participate by Zoom, please email us at: fallschurchdems@gmail.com or complete the form on our Contact Us page, and we'll send you a link with instructions.